This adventure began once the group landed in the Juan Santamaria airport, the largest and most important airport in Costa Rica. Fortunately most of the group members arrived on time, except for 2 people who couldn’t make it because of the hard weather conditions in Colorado. Despite the delay the last two joined the group the very next day. After the airport we headed to San Joaquin, Heredia. We went directly to a bank to exchange some money and then to “Cosechas” to enjoy a natural mix juice to taste the amazing flavors, and tropical fruits that you can find in CR. To finish the first day we went to the CPI School to have our orientation about the important things that the group needed to know about this beautiful country. As we always say, things in CR are not worse or better only different.

Once we finished the orientation the host families started to come and meet their new family members who in this case are the kids who are going to share the traditions, customs and food during their stay in Costa Rica.

The next morning we went to a beach town in the pacific coast called Manuel Antonio. The group had an easy hike inside of one of the most visited National Parks in CR. We could see many wild animals on our hike and we also enjoyed the amazing beaches and the nice salty water from the ocean. The hot weather made the water even nicer for a good swim. After the swim we had lunch in a great restaurant called “Puerto Escondido”. The food was good and necessary to recharge energies and continue our adventure. Then the group rested together on the public beach to watch the sunset and enjoy the beautiful views all around. The kids also tried the traditional snow cones which are a little bit different than the ones that they are used to. Once the sun dropped behind the horizon our day at the beach was over. The ride home went by quickly as the students watched “Buscando a Nemo”. 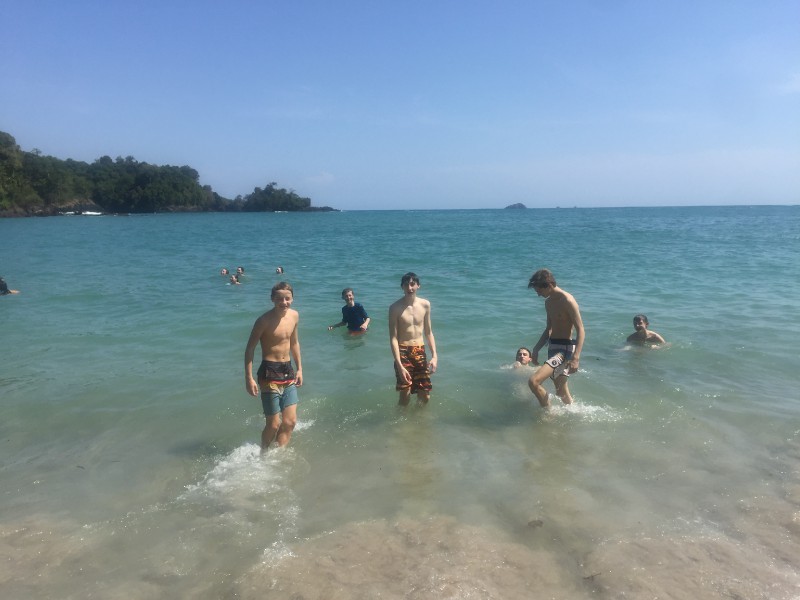 On Sunday we started the day at 9 in the morning to keep exploring Costa Rica. The destination this time is very different comparing with the past day. The city of San Jose. The capital and one of the seven provinces that shape this country. This city is where most of the population lives. We got to visit the National Theater, the “Mercado de Artesanias” and in the afternoon we went to the stadium Ricardo Saprissa to watch a soccer game. La Liga against Saprissa. This was a very interesting match between the most popular teams in Costa Rica. The group was supporting and cheering during the game as if they are already “ticos” y “ticas”. The game was intense and both teams had very good chances to score but in the end the result was a tie (1-1) and so everyone was happy. 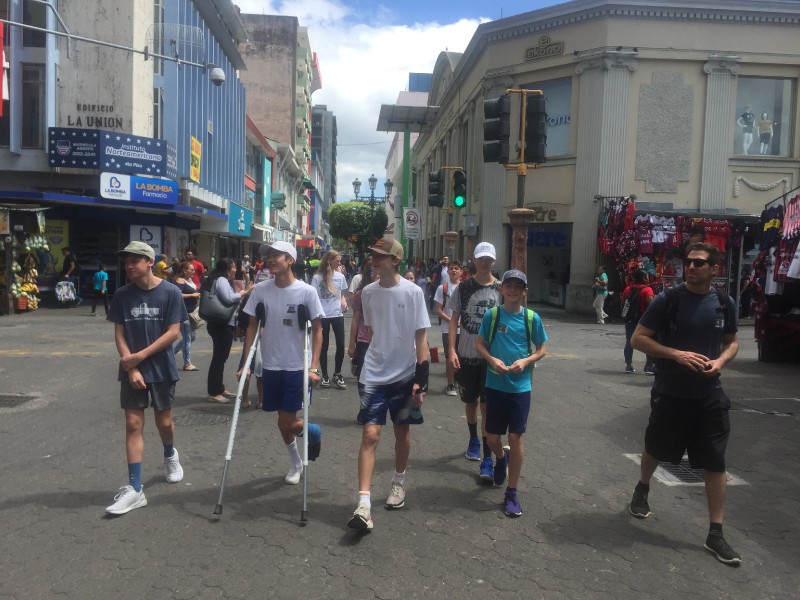 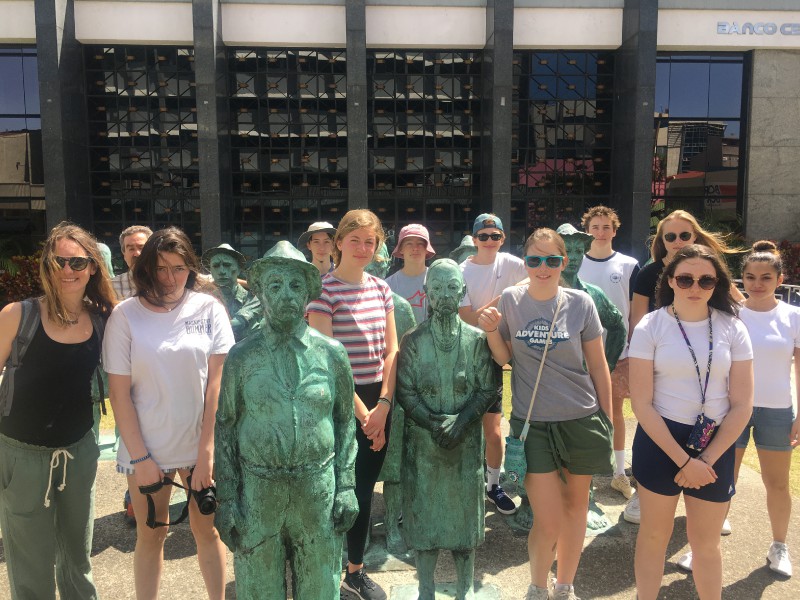 To start the week the group had a walk about around the village where the school is located. San Joaquin is a nice and peaceful village with a school, a high school, church and soccer field, a typical Costa Rican pueblo. Right after the excursion, we headed to CPI School to start our educational program. The group had a latin dance class which included rhythms like salsa, merengue, cumbia and finished it off with some fun choreography together as a group. After working up a sweat we continued with a cooking class. The chef taught us how to prepare “arroz con pollo”. A very traditional and delicious meal that costaricans love. Off course our lunch for the day was what the kids cooked, the food was amazing.

During the afternoon the kids study Spanish for 4 hours with a break in the middle for snack. The groups are divided by their different levels in the Spanish language. After all, that’s the main reason why they are on this trip.

On Tuesday we had another different activity. We visited a Herpetological Refuge located in Santa Ana. It´s an animal rescue center. This organization helps care for animals that were being kept in peoples homes illegally. The students got to observe some of the most interesting animals that inhabit Costa Rica. helped by doing some of the regular duties on the site like cleaning cages and trails. After the hard work they got the chance feed the animals and interact with them like you can only do in a place like this.

The next day we went to La Carpio. La Carpio is well known for being a marginal zone inside the capital of CR. It has a lot of history of how it was populated little by little by mostly Nicaraguan immigrants and poor people who can´t afford a proper house. The idea of this visit is to show the group not only nice places but for them to see a side of Costa Rica that is not often recognized. They also get to see the reality of how some people live in really bad conditions. We had a walk around the community and our guide showed us some of the schools and daycare centers that belong to the Humanitarian Foundation. The foundation that we work with has accomplished many good things for these people throughout the years. I think the kids now are more aware of how lucky we are just with having food on our plates and a nice house where all the family is safe. After the walk we played with the children of this community. The “abuelas” put on a play for us where we all participated. And then we had a healthy lunch to recharge batteries and continue with the Spanish lessons as we do during the whole week.