Our first week was a week of discoveries and adjustments.

During several days the students have been discovering one of the most important & characteristic aspects about Costa Rica: The Food.

The first days they tried the ¨Casado¨ which is the main typical dish that Costa Ricans take at Lunch. It was surprising for them to realize that here in Costa Rica, we eat lots of rice and beans, day after day, just changing the kind of meat for each meal. But when they all tried a ¨Casado¨, the combination of flavors and textures in the dish made them find out the reason why people from Costa Rica have so many ¨Casados¨ in a week.

They also had a great experience with Caribbean food. We ate a delicious dish from the province of Limón called ¨Rice & Beans¨, served with spicy chicken. Everybody loved it!

Any experience of Costa Rican food involves the popular ¨Gallo Pinto¨ and ours was not the exception. Almost all the students were welcomed in their host homes with a plate of ¨Gallo Pinto¨ as breakfast during their first days with their tico families. The reactions were very mixed; some enjoyed this typical dish a lot while others did not like it at all.

We went to the new Famer´s Market in Heredia that has recently opened and the students were amazed by all the different types of fruits that are produced here in Costa Rica. We couldn’t resist and we tried a bunch of them.  Besides, some of the students discovered ¨La Marimba¨ (a really interesting and melodic Costa Rican music instrument) in the Farmer´s Market. This instrument was being played by some men, as part of the celebration for the newest Farmer´s Market in Heredia.

We visited the Café Britt Coffee Tour to learn about the history of coffee in Costa Rica. It was interesting because the students not only learnt about coffee but also, they had the opportunity to see the dressing, the quotes and the lifestyle that Costa Rican ¨Campesinos¨ (farmers) have in the rural areas of this country. By the way, we adored all the different types of coffee that they gave us to try.

They got to learn some of our culture and history by visiting the Heredia town and discover the life and achievements of one of Costa Rica´s former presidents Alfredo Gonzales Flores, by beholding and getting information from ¨El Fortín¨ and the Catholic Church, and walking around the Heredia´s central market.  They could also have the opportunity to talk with several locals about their opinion on the current public health service and other important topics related to the life in Costa Rica.

The students also experienced some adjustments. When they arrived to their tico homes, they saw that our traditions and life style are nothing like theirs, back in The United States. Some of them realized that since their papás ticos (mom & dad) have jobs, they have to wake up early to have a prepared meal for breakfast. Otherwise, they will have to eat cereals and milk by waking up late. Others were surprised by the fact that there are lots of dogs everywhere (in their host homes, on the streets, etc…).  Also, they could discover that one must always take a look of both sides of the street before passing through to make sure no car is on the way, and they don’t do that in The Unites States.

On our second week, the students started the classes with the professor to learn important aspects of the culture, history and politic system of Costa Rica.

The culture experiences took a big role in the activities of this week. We had an amazing dance class where the students learned a lot of dance steps from different Latin music genres, such as Salsa, Bachata, Merengue, and Cumbia. This class was an atypical but very good way for the students to learn a big part of the culture in Costa Rica & Latin-America: The music and the dance.

Besides, we experienced a great cooking class in which the students got the opportunity to peel and chop vegetables, prepare the chicken and handle other ingredients to cook a delicious Arroz con Pollo (Rice with chicken). Students had a lot of fun by participating in the elaboration of this common but famous dish while learning the Spanish name of some food ingredients and kitchen utensils that they did not know.

One of the main objectives of the program is to learn about Costa Rica´s public health system and the best way to accomplish that objective is to know the places where the public health service is delivered: The public clinics & hospitals.

Our first visit was at La Caja Costarricense de Seguro Social (CCSS). We met some workers from CCSS to have an informative talk. They mentioned to the students, the important role of the CCSS in the health service of the country, all functions and duties that this institution has, as well as, other aspects about the history and changes of  ´´La Caja´´ during its 77 years of existence. The public workers also explained the 3 levels of service among clinics and hospitals and their characteristics. The students were also told about the weaknesses and challenges of institution nowadays.

In the next visit, we went to the new Barva clinic and we were welcomed by one of the doctors. He showed us all the clinic facilities and explained to us the kind of medical procedures and treatments offered in level 1 of the health service. The students were shocked to watch that some areas of the clinic were empty while other places were crowded with patients waiting to be seen.  The doctor clarified several doubts to the students, as well.

The week ended with a one day trip to La Paz Waterfall Gardens. Students could have contact with nature by observing several species of wildlife, and by walking through the forest to discover some beautiful waterfalls.

The third week gave us a lot of emotions and new experiences. The first activity on that week was to visit a Precario which is a very vulnerable and poor community. In Costa Rica there are several precarious but we visited the one called ´´El Triangulo de la Solidaridad´´. We got to know Boy With The Ball which is a Non-Governmental Organization that helps kids and teenagers in the Precarios and other vulnerable areas in different countries around the world.

Some volunteers and workers were with us to explain better all the history and evolution of this NGO. Later, we made a walk around the community to know how people live there; and the students were shocked when they found out the way people live there, some of them did not even acknowledge that places like ´´El Triangulo de la Solidaridad´´ existed in the world. After the walk, we returned to the Boy With The Ball facilities to analyze all the things that we saw in the walk.
On this week, the group traveled to the Boruca community to learn about its lifestyle, culture, and traditions. They stayed with some Boruca Families, and also had some painting classes. They visit the archeological site called Finca 6 to behold the pre-Columbian spheres and listen from a specialist, the history of their creation and the meaning that these stones have for the indigenous populations.
We continued learning about the Costa Rican public health system, by going to a small clinic in Buenos Aires, and the Alajuela Hospital. At this hospital, a nurse showed to us all the facilities, while she was commenting on all the differences that exist between a level 2 hospital and a level 3 hospital.
On the fourth week, the experiences were very mixed. We had new things to learn about Costa Rica and some fears were overcome.
The first day of this week, we drove all the way towards Los Angeles de Llano Grande de Cartago with the purpose of visiting the school Pastor Barquero Obando; during all the travel we could behold some really nice views of the central valley and some forest patches.
Once there, the students settled inside several classrooms of the school to watch the professors delivered the teachings. Later, the students went out to play with all the kids on break time and we all had so much fun. Some students also answered some interesting questions that the kids had about the United States. After doing these activities and sharing candies with the kids, we were invited to have a delicious lunch at the school dining room.
We said goodbye to School’s kids and teachers to go at the house of a professor’s relative and have a ¨cafecito¨ and get ready to return to San Joaquín.
We made two very interesting visits this week. The first one was in Hospital Mexico, where a very experienced worker gave us a total tour of all the different floors and areas of the hospital. She also explained what type of patients and conditions are treated in each area of the hospital. In that way, the students could know level 3 on the health system.
The second visit of the week was at La Corte Suprema de Justicia. In the facilities of this institution, two very important women of this institution explained to the students how the Costa Rican justice system works, and the laws regarding the protection of minorities and human rights, as well as the strengths and weaknesses of these laws 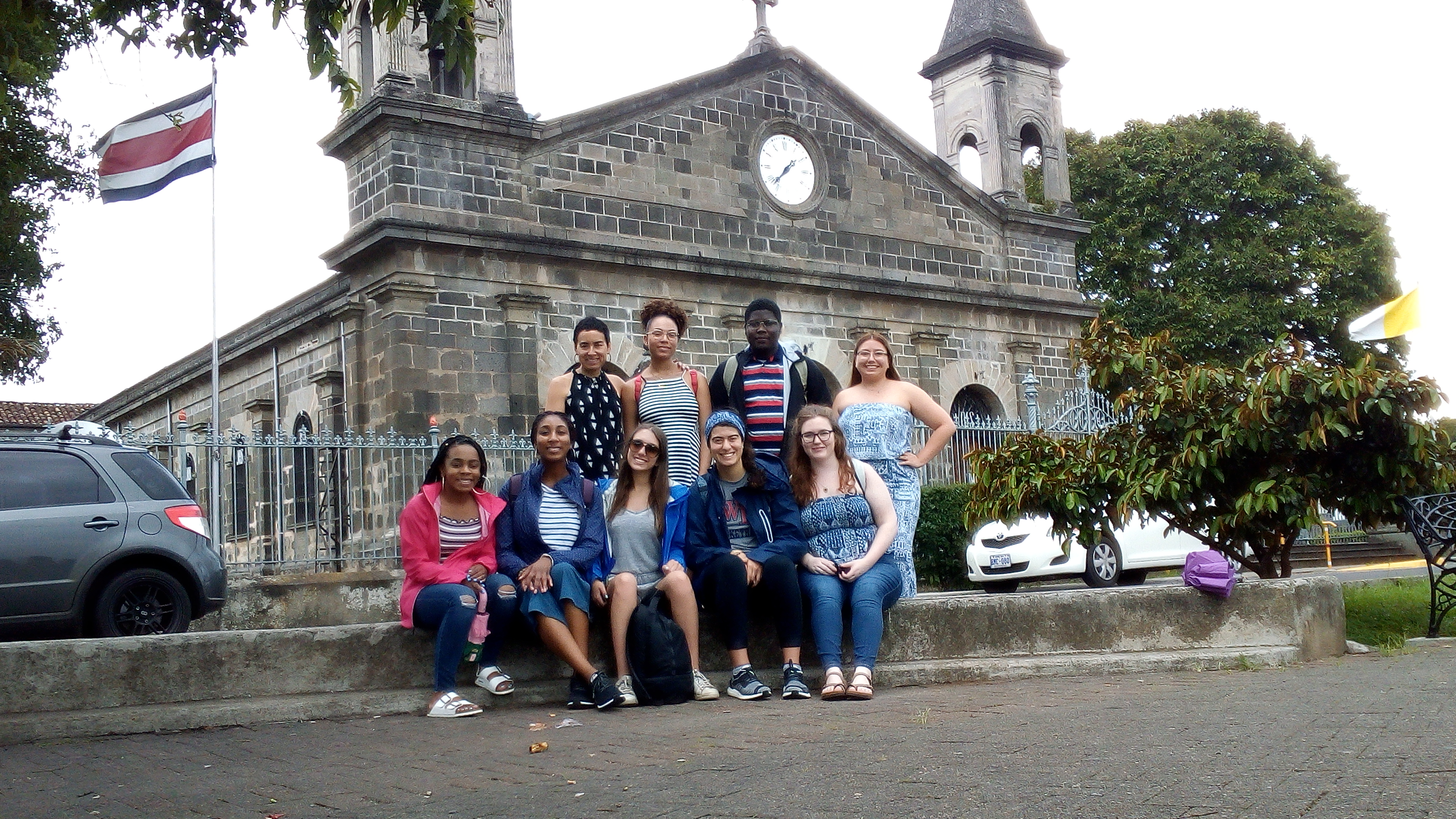